A robin or a nuthatch, red breasted in any event, was busily working the front border garden this morning.  My emerging out the front door sends Spots climbing the fence and  flocks of swallows fluttering up to the top of a tree. I chased a quail off the driveway as I drove to church to record the service music.  Creekside will have an online service for the duration.

Mike and I spent the afternoon on the great tree project.  The dead tree was 10-15 feet tall, split and truly, clearly dead.  I believe it was  spring a year ago when we pulled down a dead branch that was half the tree.  Mike used a chain saw to cut a notch in the front of the tree to direct its fall and then sawed through from the back.  I had the rope to pull the tree in the desired path, avoiding both the hydrant off the fire prevention pond and me.  Taking down the tree was the easy part.  We filled two trailers with branches and eventually large sections of the trunk. 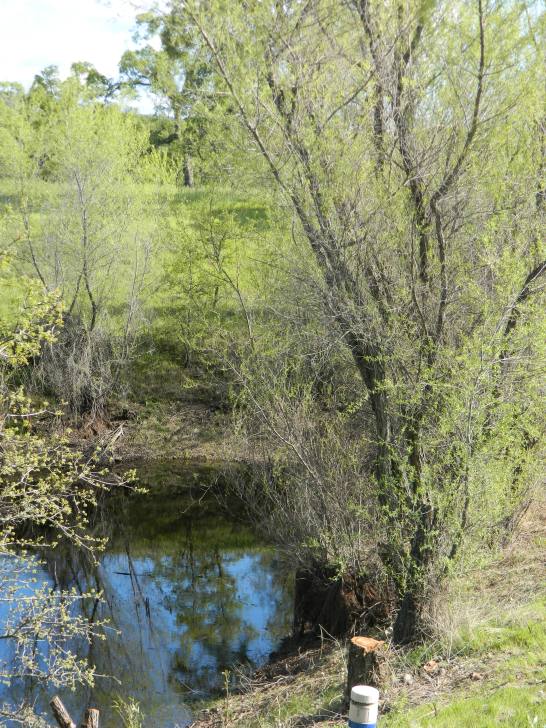 After and before.  The stump is just behind the hydrant at the bottom of the picture to the left.

Removing the dead tree exposed two large branches (10- 12 feet) out of a tree that was almost uprooted out of the soil around the pond.  Watching the branches twist in the wind prompted my decision to cut them down as well. I was at one end of the rope with all my weight, and the branches nearly fell into the pond anyway. More hauling up the slope to the trailer on the driveway, sawing the branches into manageable lengths and filling the trailer.  Not bad work for one 66 year old and one 71 year old.  I saved a sapling growing out of the stump and will see if it will take hold and grow straight.

I took advantage of the afternoon to clear lower lying deadwood at the base of the older trees that line the driveway and that are meant to avoid having the driveway subside in a flood off the fire prevention pond.  Clearing the dead wood I hope will encourage new growth. I also had some practice time using the chain saw.

View all posts by ayearatthesnake